Parker finally watches the "Saw" movies many years too late

As I said on the most recent episode (JFD45), I've made the brash and perhaps illogical decision to watch all seven "Saw" movies in rapid fire order this week. I've only ever seen "Saw II" in its entirety, and I've seen most of 3, 4 and 5, though never in one sitting, just in non-sequential parts stretched over many years, just like the way members of Congress read proposed legislature. Now that "Saw" is over (so they say), it's the exact correct time to get in on the "most successful horror franchise in history," as that's how I get into most things I end up liking: years after everyone else stopped caring. Examples of things I've discovered that I enjoy recently: Rilo Kiley, The Postal Service and turntables. Anyway, I'm ingesting this decade's horror franchise and here are my thoughts thus far. Oh, and spoilers abound.

I'd never seen the original movie, which always seemed fine to me. I think the batting averages for the first entry in a horror franchise is around .475 at best. The first "Halloween" and "Texas Chainsaw" movies are pretty great and probably about as far as you need to get into the series, but with "Friday the 13th," or "Nightmare on Elm Street," you can probably just skip ahead to parts 2 or 3 and you'll be okay.

Anyway- this first installment was surprisingly good. Like all good horror, there's a simple set up and, basically, your imagination does a lot of the walking (at least for the first half of the film (and probably more so if you're not watching this movie after getting seven years worth of spoilers)).

Cary Elwes does a good job of conveying the idea that he's really upset about being chained to a pipe in a shitty bathroom. And I was surprised to see Danny Glover up in this piece, though, I was really hoping he'd say "I'm too old for this shit! Seriously, I'm 57 at the time of filming. I am certainly too old to be cast as a police officer." It was also fun to count all the cast members of "Lost" that showed up (answer: two), and then it was even more fun to watch them get brutally murdered, as the lack of brutal murder was why I stopped watching that show. Also, because it was fucking stupid.

Despite the fact that I knew most of what happened at the end of this movie going in, I was still pretty impressed with how well it was done. I knew full well that Jigsaw was the "dead" guy in the room, but when he stood up for the final reveal, I still had a slight "oh shit!" moment followed by the vague feeling of regret that I hadn't seen this in the theater so I could feel that "oh shit" moment sans spoilers. And, quite possibly, that moment would probably make the entire franchise worth while even if the subsequent six movies suck. I think Jigsaw closing the door on that photographer kid should be remembered as an iconic visual moment in horror, right up there with Michael Myers' missing body at the end of "Halloween" or that blood coming out of Johnny Depp's bed in "Nightmare."  It's not exactly an end scare, the way Jason or Freddy would do, but it leaves you with a serious sense of unease.

Saw II (2005)
This is the only "Saw" movie I've ever seen on purpose. On a whim, I saw it in a cheap theater with some broad and we laughed and laughed about how badly it sucked. For one, it had the bad Wahlberg (Donnie) in a starring role (this was before "The Happening" and Americans still considered Mark to be the "good" Wahlberg). After seeing the original, "Saw II" barely even feels like a continuation of the story. After a check on IMDB, my suspicions are confirmed. Apparently, the film is based on a script that had been floating around Hollywood and some genius said "Um, we'll just throw Jigsaw and his oddly dressed puppet into this script and we'll have a stew goin'!"

This installment sets the franchise's new standard that the films will feel less like horror films and more like gorey action movies. In a lot of action movies, bad guys coming up with devious plans, traps and ultimatums is par for the course. Green Goblin made Spidey choose to save Mary Jane or the tram full of tourists in "Spider-Man," those cocksuckers in "Total Recall" shut off the mutants' oxygen to piss off Quaid and there was that weirdo bad guy who made that lazer beam trap designed to cut James Bond's junk in half. Jigaw's puzzles are no different than these, aside from the fact that Jigsaw's reality is a shitty, bleak one, where heroes like Peter Parker, James Bond and Quaid don't exist, but apathetic junkies, abusive dads, corrupt cops and health insurance salesman make up most of the population. Jigsaw even has the same basic plan that the axe cult had in Stallone's "Cobra," in that they both want to cut the fat (pun intended) and keep the members of society that are strong enough to make it a better place (though, I think their ideas of "a better place" are probably a bit different).

I do, however, find it interesting that the real star of the show, Jigsaw, is actually treated as such. Everyone knows that Freddy's the star of the "Nightmare" movies. There's no one on Earth who'd sit through a Nancy spin-off tv show, for instance. But, Freddy's never treated like the star. There's always some new "it" girl that takes up most of the screen time and gets most of the dialogue. Even "Freddy vs. Jason" had the "main character" of Lori, for some fucking reason! But this isn't Jigsaw's bag. We all know he's the star (well, you could probably argue that the traps are the stars, I guess), and as such, Jigsaw's all up in the camera, getting just as much screen time, or more, than Donnie Wahlberg. This is really another action flick convention that, brought into a horror movie, is really refreshing and interesting. 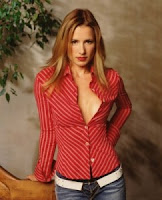 This movie still pales in comparison to the first one. The characters are lame (Jigsaw aside (Tobin Bell is really good)). I love Shawnee Smith, but her Amanda character is boring in this (although I like her character in the first film and, to a leser extent, "Saw III"). The traps are really lame in this, too. There's one where if you look through a door's peep-hole, you get shot. And another where you have to climb into a furnace and then you (surprisingly?) get burned to death. Boring, uninspired crap, mostly. The end reveals don't pay off nearly as well this time around. I kinda liked the fact that Wahlberg Jr. was in a safe the whole time, but I went through so much crappy lameness to get there that I didn't really care too much either way by the time it was revealed. Also, he was kind of a dork. And, as I said, I like Shawnee Smith, but I mostly found it "interesting" that she had joined Jigsaw rather than finding it "mind-blowing" or "so crazy that I can't wait to find out what happens in 'Saw III'" or anything like that.