I feel like I watch a lot of movies. Like a lot a lot. Sometimes it seems like it's all I do. Never the less, I don't feel like I see enough movies. That being said, my list will be slightly different from Kevin and Parker. I'll be presenting my top 5 that I saw in "the" theater and the top 5 I saw in my (Spectacle) theater. Keep in mind that all of these are probably presented in no particular order. Also, I hate doing this.

5.) LOOPER
To me, this sounded like heaven on paper. As a fan of Rian Johnson and time travel - this seemed like the Recee's Cup of cinema for me in 2012. As the days counted down til it's release I found myself worried that it would be too much of one and not enough of the other. What I got was, I guess more like a Mallow Cup? I don't know I think I lost it with the candy metaphors here. The point is, this isn't a perfect film but it's well acted (especially from JGL) and has some of those signature Rian Johnson flourishes I've come to appreciate so much. I think I said this on the show but this is one that I think I need to revisit - and soon.

I didn't really know anything about this film when I went to see it. It was an afternoon burner with Steve and I showed up not knowing what to expect. What I got was 2 hours of action, pure and unadulterated. I'm not sure what the street value is on that much action but it has to be a lot. Fight scenes (which had to be in the dozens) were choreographed in blistering detail. Weapon choices were often exotic. The story, though wafer thin, was enough to hold it together like the tendons of so many broken limbs. In a climate of punch-for-punch edits (a la the Nolan Batman trilogy) where you left feeling like you weren't quite sure who hit who but that someone got it, THE RAID was a breath of fresh air, you know, when you had time to catch your breath. Here's hoping I never get kicked through a door only to have my neck impaled on the jagged, broken edge. 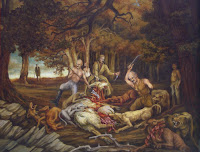 Look, I know that episode we talked about this on got pretty long and muddied up with a lot of us going round and round about the vicious hype machine of the Internet and fandom. I know. But, at the core, I really like this movie. It's funny and fresh and smart and had some really good looking CGI birds in it. Ok maybe not that part about the birds. I feel like we've probably talked about this movie enough, though. I like it. I like it a lot. I don't think it's gonna change the game for genre cinema or anything, ok?

Another pick I more or less stumbled into. I had heard rave reviews from friends I trusted. I was in OH and managed to get a rag-tag team of misfits together to see this before I left town. I didn't watch the trailer or anything. I went in with only my Reece's Pieces. Of all the films on this list I found myself talking about this one the most. More or less a love letter to the tropes of genre cinema filled in by a series of amazing performances from the lead actor the film promotes as much head-scratching as it does praise.

If I had to pick a favorite film of 2012, it would be FRANKENWEENIE. I'll take my licks on this one, I know it's Tim Burton and (even worse) a Tim Burton remake by Tim Burton. This is certainly not an endorsement for remakes in general or the idea that Tim Burton should keep this up, no no no. I don't mind eating crow here. The film looks great, is chock full of references to classic monster movies, and has some expert voice talent behind it. I would be a liar if I failed to mention that my decision was undoubtedly swayed by the fact that I lost my dog/friend that I had for 1/3 of my life this September and FRANKENWEENIE touched my cold, black heart at a time when I really needed it. I didn't cry. Sarah's gonna try and tell you I cried but I just had popcorn in my eye.

5.) BLUEPRINT FOR MURDER
One of the asskickers from our massive SUMMER OF SHRAPNEL series in August, this film took me totally by surprise. Double crosses, triple crosses, pop-art sets, chase scenes, finger traps, secret blueprints, and a snazzy soundtrack make for a fun filled watch. I'd like to think that this would play well on the show. Might be worth the gamble. It's a shame more people haven't seen this one. 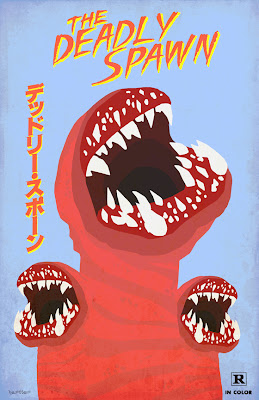 4.) THE DEADLY SPAWN
Admittedly this is cheating in every sense of the word. This was my programming, I've seen it a million times, and we covered it on the show with much fanfare. I can't stay away. I absolutely love this film. When I booked it for our NEARLY DISTANT FUTURES series in March, I have to admit, it was mostly for me. I quickly realized that we had a real opportunity though. Over the course of the screenings we were able to have director Douglas McKeown out for 2 screenings and producer Ted A. Bohus out for one. The two men gave vastly different accounts of the making of the film and added a Rashomon element I was not expecting. I feel like I learned a lot about not only the trials and tribulations of making this specific film but films in general. I had seen THE DEADLY SPAWN as a youth and reveled in the gore and now as adult I was able to appreciate it in a whole new way. Experiences like this one are some of my favorite parts of the theater and I hope that Spectacle can do that for everyone in some way. Also, if you were wondering, I totally got the colored wax on that Mondo soundtrack release. 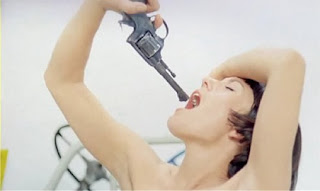 This was the second Alain Robbe Grillet film I had seen at our beloved theater and I was excited. While I loved TRANS-EUROPE EXPRESS, I was assured by Troy that I would be floored by EDEN & AFTER and he wasn't wrong. Being a member of this collective has taught me a lot of things, much like JFD I can pretty much gauge who will like what when I program it and generally, it's easy to tell. This, for example, I know that Parker would just absolutely hate. Just hate and hate and hate. It's a super French labyrinth filled with drugs, suicide, blood, art, weirdness and red herrings. Will we end up doing it on the show? We'll have to roll the dice. 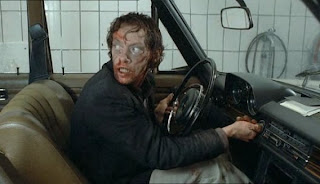 Goddamn what a nasty little movie this is. Just utterly vicious from start to finish. It's easy to see all the cherry picking that Gaspar Noe and Darren Aronofsky did from this film. It's like they sat down and agreed who would take what almost. Like a fringe slasher film that seems at times like it's trying to get away from itself. This played to packed houses every time we screened it. I remember sitting in the very back on the trash cans and being able to not only see the film but also the reaction of the crowd. Visceral and intense the fear was inescapable. The short runtime and throbbing soundtrack only heightened the experience.

Again, if forced to pick an all time favorite, I would have to go with this. SPEC2BER was ushered in with a lot of high hopes as last years October programming provided some record breaking nights for us, I had very high hopes. It's easy to work in themes but the last thing any of us want is for Spectacle to become "that place that shows ___________ movies." No Gods, No Masters, No Popcorn. I want everyone to be able to see everything in our little corner of Brooklyn cinema, and I think for the most part we achieve that. This SPEC2BER was great, for sure. This film however, was the stand out for me. Jon Dieringer (friend of the show and EIC at Screen Slate) programmed this and seemed to almost struggle with how to classify it. If you know Jon, you know this is a miracle in and of itself. We paired this with a Yugoslavian New Wave horror comedy and while that film did very well, no one knew quite what to make of this one. I saw it all three times we screened it. I worked the booth for 2 and sat in the seats for one and it's A CRIME HOW FEW PEOPLE SAW THIS. Dripping with loneliness and an almost desperate plea to be seen and understood. The films bleak but often darkly hilarious story is one that stuck in my brain and resonated in a way I didn't think it would.