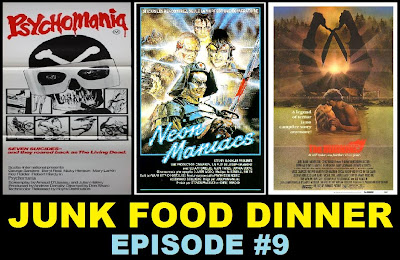 We're back, weirdos! Episode #9 of the Junk Food Dinner Podcast is finally here! This week Kevin, Mark and Parker raise hell with a gang undead British bikers in 1973's "cycle-delic" freak-out Psychomania! Then we battle not one, not two, but twelve(!) mutant killers in the 1986 cheesy horror romp Neon Maniacs and finally we're terrorized by a garden shear wielding murderer in the often overlooked, but highly entertaining, star-studded summer camp slasher flick The Burning from 1981, one of the first films ever released by Miramax.

Also, we have Nerd News, this week's DVD releases and much more!

Also, got a movie suggestion for the show, want to give your opinion on a movie we talked about or just want to tell us we suck? Drop us a line at JFDPodcast@gmail.com