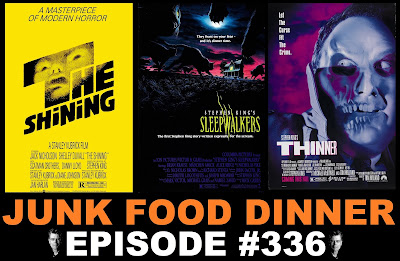 In an effort to get even further into the Halloween spirit this Schlocktober, the JFD boys break out the old Ouija board to conjure some ghosts, and lo and behold, guess who we brought forth; the ghost of former host Mark Freado Jr to talk about three Stephen King-penned films picked by the Randomizer 5000.

Up first, all work and no play makes Jack Nicholson a dull boy... and a murderous psycho when he brings his family to live in a giant hotel during the off-season only to be tortured by the ghosts of those who died before in Stanley Kubrick's The Shining from 1980.

Then, a new kid moves to Indiana from Ohio, but he's hiding his secret identity as a shape-shifting, mother-fucking (literally) cat person in Sleepwalkers from 1992.

And finally, an obese lawyer is cursed by a gypsy after running over his daughter while getting road head. The gypsy curse causes him to lose weight at a rapid pace, forcing him to try and exact revenge before he wastes away to nothing in Thinner from 1996.

Got a movie suggestion for the show, want to give your opinion on a movie we talked about or just want to tell us we suck? Drop us a line atJFDPodcast@gmail.com. Or leave us a voicemail: 347-746-JUNK (5865).Also, if you like the show, please take a minute and subscribe and/or comment on us on iTunes, Stitcher, Blubrry or Podfeed.net. Check us out onFacebook and Twitter! We'll wrestle a Canadian Satanic nuclear monster for your love and support.