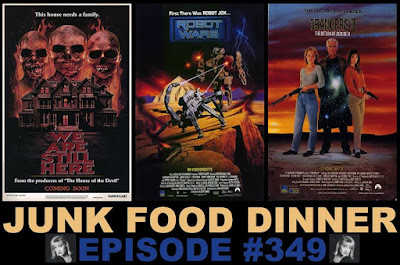 Hey, Junkies! We're back with a whole show dedicated to one of our favorite actresses, Barbara Crampton! And, as the cherry on the sundae, we're joined by Barbara herself to discuss her career, her films with Stuart Gordon and Jeffrey Combs, Beyond the Gates and ... La La Land!

First, A couple moves into an old house after the death of their son. But is he still there? Or is it something more evil? In "We Are Still Here."

Next, Barbara plays an archaeologist searching old Fox Theatres for relics of the past. And there's robots for some reason in the Albert Band Full Moon flick, "Robot Wars."