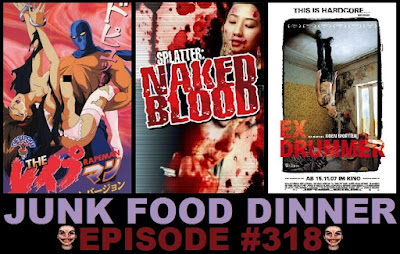 It's hot, it's sticky, it's gross. That can mean only one thing; Ghoul Summer is here! That's right; spend a humid, sweltering couple of hours with Kevin, Parker, Sean and our special guest host, the grand marshall of Ghoul Summer, Mike Dikk from Kissing Contest and get despicable with a trio of uncomfortable flicks.

Up first, a Japanese anime about an avenger for hire who rights the wrongs of the world with forced sex in The Rapeman from 1993. Is this ultimate taboo cartoon just subversive satire or a heinous portrayal of vulgar ideals? You decide.

Next, a young man discovers a revolutionary new pain killer, but when he secretly tests it on three young women, he quickly realizes that turning pain into pleasure has some ghoulish downsides in Splatter: Naked Blood from 1996. This Japanese horror film has some of the most nauseating gore scenes in Ghoul Summer history!

And finally, a group of Flemish losers with handicaps recruit a hip writer to round out their punk band and bare witness to their depraved lifestyles in Ex Drummer from 2007. Is this film gross enough to truly be considered a "ghoul movie" or is it just an grimy Trainspotting rip-off?

All this plus witty banter between ghouls, touching Junk Mail, Sean incorrectly claiming ALF was the first alien sitcom, news about dead midgets, ghoul wrestling, serious debates on whether rape is fair fodder for humor, Mike getting queasy while eating a donut, audio issues from New York, the mystery of Mark Freado's ghost and so much more!

Got a movie suggestion for the show, want to give your opinion on a movie we talked about or just want to tell us we suck? Drop us a line atJFDPodcast@gmail.com. Or leave us a voicemail: 347-746-JUNK (5865).
Also, if you like the show, please take a minute and subscribe and/or comment on us on iTunes, Stitcher, Blubrry or Podfeed.net. Check us out onFacebook and Twitter! We'll make it through another Ghoul Summer with your love and support.

Also, BUY A GHOUL SUMMER SHIRT FROM HIDE THE BODIES! 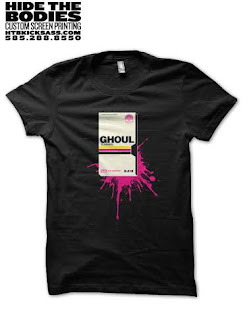