JFD363: Fritz the Cat, Mr. Sprinkles, Where the Dead Go to Die 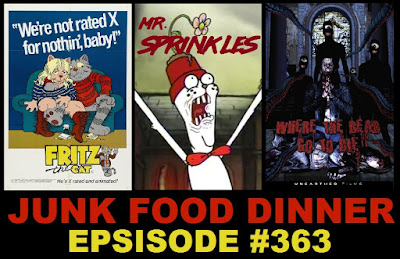 Up first, it's the granddaddy of adult animation, Fritz the Cat from 1972. Directed by Ralph Bakshi and based off the comics of R. Crumb, the x-rated 'toon made a lot of money and kicked open the door for cartoons to be dirty.

Next, back in 2007, Jack Black, Dan Harmon and Rob Schrab teamed up to create Acceptable TV, an animated sketch show that briefly ran on VH1. One of the more popular skits was Mr. Sprinkles about a Cat-in-the-Hat type creature who's losing his mind because kids are never bored anymore. From the creative team behind Rick & Morty.

And finally, what do you get when you mix PS1 cut-scene style computer animation and Ghoul Summer-worthy subject matter? Where the Dead Go to Die from 2012. It's horrendous.


Got a movie suggestion for the show, want to give your opinion on a movie we talked about or just want to tell us we suck? Drop us a line atJFDPodcast@gmail.com. Or leave us a voicemail: 347-746-JUNK (5865).
Also, if you like the show, please take a minute and subscribe and/or comment on us on iTunes and check out our new Patreon and Youtube as well. Follow us on Facebook and Twitter! We'll finally get to see some cartoon boobs with your love and support.