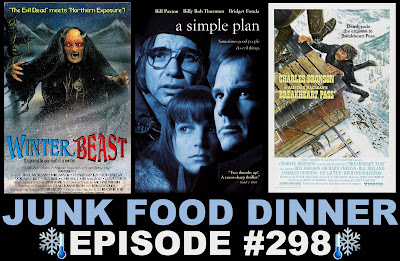 Well folks, we're officially in the icy grip of winter, so why not embrace the cold by partying with your Junk Food Dinner bros and three winter-themed movies.

Next, we discuss A Simple Plan from 1998. No, not that shitty pop-punk band, the Sam Raimi flick starring Bill Paxton, Bridget Fonda and William Robert Thornton about a group of small town folk who find a bag of money in a crashed airplane and decide to keep it. But like a Biggy song come to life, mo' money means mo' problems and shit gets real.

And finally, Charles Bronson is a prisoner with a secret being transported on train filled with Civil War soldiers, but things quickly escalate when people start ending up dead in Breakheart Pass from 1975.

All this plus witty banter between friends, Parker avoiding illness, Kyle from Kentucky, a caller obsessed with numerals, Nerd News & Blu-ray Picks, movies inspired by t-shirts, defense of Sam Raimi's middle period, Mexican Ozzy, continued lack of police involvement and so much more!

Got a movie suggestion for the show, want to give your opinion on a movie we talked about or just want to tell us we suck? Drop us a line atJFDPodcast@gmail.com. Or leave us a voicemail: 347-746-JUNK (5865).
Also, if you like the show, please take a minute and subscribe and/or comment on us on iTunes, Stitcher, Blubrry or Podfeed.net. Check us out onFacebook and Twitter! We'll survive the winter with your love and support.
Labels: A Simple Plan Bill Paxton Billy Bob Thornton Breakheart Pass Bridget Fonda Charles Bronson Podcast Sam Raimi Winterbeast