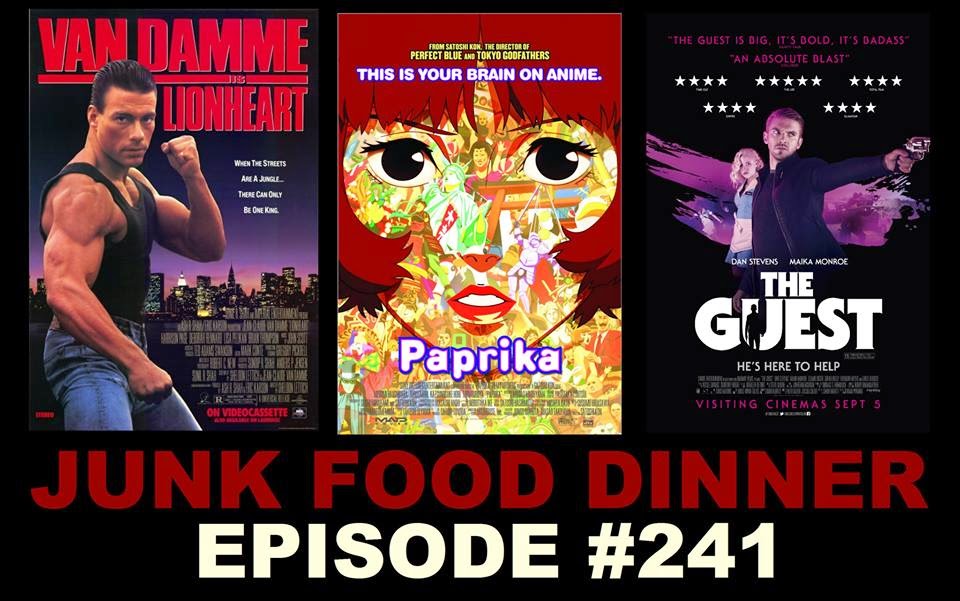 First, Jean Claude Van Damme quits the French Foreign Legion when he hears his brother has been murdered. This leads to a bizarre underground fighting tournament and some very soggy leotards in "Lionheart" from 1990. The movie was written and directed by frequent JCVD collaborator Sheldon Lettich ("Double Impact," "Bloodsport").

Next, Satoshi Kon ("Perfect Blue") directs the beautiful and trippy 2006 anime "Paprika," about a scientific machine that enables psychologists to enter their patients' dreams. the film is often cited as being the unoficial source material for "Inception."

Finally, a young soldier visits the family of his dead comrade in Adam Wingard's "The Guest," from 2014. Is this soldier who he says he is? The family is suspicious. You won't be, though, because (BEWARE!) we spoil the whole damn thing!

All this, Nerd News, DVDs, Sweet Mans and 74 other things!

Got a movie suggestion for the show, want to give your opinion on a movie we talked about or just want to tell us we suck? Drop us a line atJFDPodcast@gmail.com. Or leave us a voicemail: 347-746-JUNK (5865).
Also, if you like the show, please take a minute and subscribe and/or comment on us on iTunes, Stitcher, Blubrry or Podfeed.net. We'll get pints of butter brickle hard packs from your love and support.