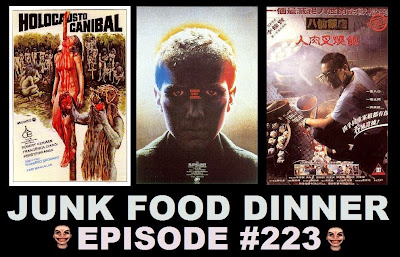 It's our second and final Ghoul Summer episode of the year and we're joined by Ghoul Godfather, Mike Dikk (of Kissing Contest) to discuss 3 movies he picked.

First, a professor goes deep into the Amazon to track down his missing documentarian students. But he only finds their footage and the grisly atrocities contained therein in 1980's Cannibal Holocaust. The flick, directed by Ruggero Deodato basically invented the Found Footage genre.

Next, a young Russian boy finds a gun and joins the army to fight back against the Nazis during World War II in 1985's "Come and See." It's a movie widely regarded as one of the best movies ever made.

All this plus witty banter between ghouls, Orion: The Comic-Con Correspondent, Turtles and their cool bodies, Nerd News, Blu-rays, Being a "cost-effective" ghoul, the podcast gold rush and so much more!

Also, if you like the show, please take a minute and subscribe and/or comment on us on iTunes, Stitcher, Blubrry or Podfeed.net.We are gain ghoulish powers from your love and support.