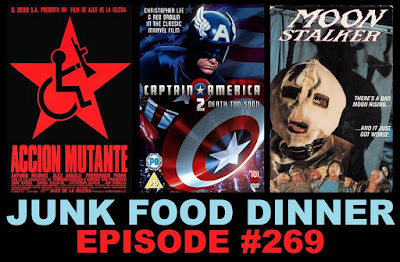 Junk Food Dinner returns with three movies no one has ever heard of!

First, a Spanish movie that really hasn't been made available in America much: 1993's Accion Mutante. The flick, directed by Álex de la Iglesia (Witching and Bitching) is about a group of deformed terrorists who are bent on destroying all of the future's beauty.

Finally, campers who are really into whips and hamburgers run afoul of a serial killer in the mountains of Nevada. It's Moonstalker from 1989. It's a slasher. People get slashed.

All this plus Nerd News, Norman Bates' re-enactment of "Leave it to Parker" (or something), Cory from IllCon comes original with a new Sean Byron song, many more Sean Byron songs, Kevin insults Parker's favorite movie, Kyle from Kentucky, FilmThreat Chat, Nerd News, DVDs and more!

Remember to vote for our 800th movie/next audio commentary in the top left part of our website. Stay tuned for Ghoul Summer and Ghoul Summer T-Shirts and all types of ill shit.