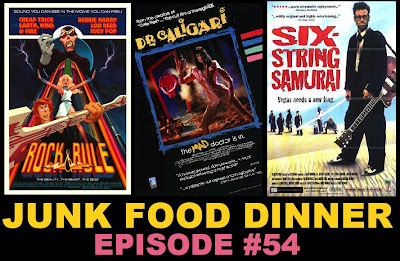 The kids return with the second of their Listener Appreciation shows, wherein three movies suggested by the listeners are examined.

First up, we take a look at the Canadian Heavy Metal, "Rock & Rule," an animated rock & roll story about weird mouse people caught in a Faustian plot from 1983. The flick features music by Lou Reed, Debbie Harry and Iggy Pop.

Then we get caught up in a journey to Lost Vegas in the retro, post-apocalyptic "Six-String Samurai," starring an annoying little kid and The Red Elvises, from 1998.