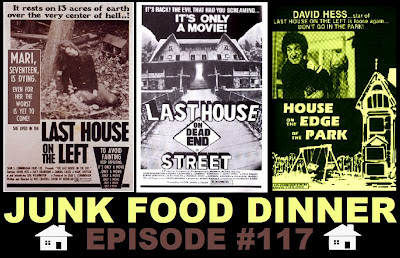 Well, folks, Ghoul Summer is officially here! What better way to celebrate the season of sun and fun than with a trio of rape-laden exploitation classics with "house" in the title?!

Up first, we take a look at Wes Craven's very first film about two young girls (Sandra Peabody and Lucy Grantham) who are kidnapped, raped and eventually murdered by a gang of creepy criminals, lead by Craven regular David Hess. But the tables quickly turn when the gang takes shelter in the home of one of the girl's parents in the pioneering and influential Last House on the Left from 1972.

Then, after being released from prison, a young criminal (director Roger Watkins) assembles a crew of fellow freaks to help him make snuff films in order to get revenge on a society he feels has wronged him, in the eerie and controversial The Last House on Dead End Street from 1977.

And finally, it's more David Hess as he and his simpleton friend Ricky (Giovanni Lombardo Radice) find themselves at a chic high society New York party. But things quickly go bad as the two men hold the party hostage and begin doing gruesome things to the party goers in 1980's House on the Edge of the Park directed by Ruggero Deodato.

Also, if you like the show, please take a minute and subscribe and/or comment on us on iTunes, Stitcher, Blubrry or Podfeed.net. We gain razor blades from your love and support.
Labels: David Hess Ghoul Summer Giovanni Lombardo Radice Last House on the Left Lucy Grantham Podcast Roger Watkins Ruggero Deodato Sandra Peabody The Last House on Dead End Street Wes Craven