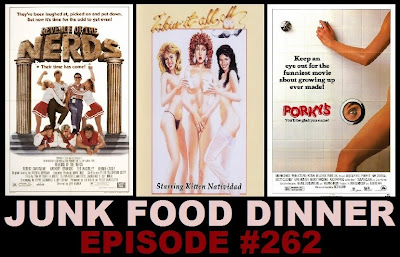 Sneak down to the basement, turn off all the lights and make sure your mom doesn't come down, because this week it's 80's Sex-Comedy Week on JFD!

Up first, we examine the movie that brought geek culture into the masses, Revenge of the Nerds from 1984. Directed by Jeff Kanew and starring a now classic line-up of nerds (Robert Carradine, Anthony Edwards, Curtis Armstrong, etc), it went on to be a staple in video stores and on cable TV in the 80's and 90's.

Next, we take a look at film heavy on the sex, but light on the comedy with Takin' It All Off from 1987. It's the sequel to Takin' It Off from 1985 and stars Kitten Natividad, Candie Evans and Becky LeBeau as our always-naked protagonists trying to raise money to keep their *ahem* "stripper school" afloat. Also making an appearance is George 'Buck' Flower, who also co-wrote and produced the flick.

And finally, we tackle another hallmark of the 80's video store/cable TV scene with Porky's from 1982. Seems like everyone in the world (except Parker) has seen this seminal teen comedy about a group of high school kids (Dan Monahan, Mark Herrier, Tony Ganios, etc) in the 50's who are desperate to get laid and try to infiltrate the local strip club/brothel; Porky's. This movie was directed by Bob Clark, the same guy who brought us Children Shouldn't Play with Dead Things, Black Christmas and of course, A Christmas Story.

Got a movie suggestion for the show, want to give your opinion on a movie we talked about or just want to tell us we suck? Drop us a line atJFDPodcast@gmail.com. Or leave us a voicemail: 347-746-JUNK (5865).Also, if you like the show, please take a minute and subscribe and/or comment on us on iTunes, Stitcher, Blubrry or Podfeed.net. We'll celebrate Cinco de Freado with your love and support.
Labels: Anthony Edwards Bob Clark Curtis Armstrong George 'Buck' Flower Kitten Natividad Porky's Revenge of the Nerds Robert Carradine Takin' It All Off