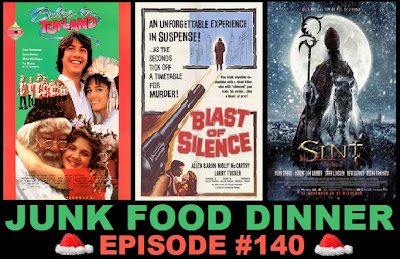 Whether you like it or not, it's time to get into the holiday spirit, as this week the JFD boys reunite for a 2-hour holiday spectacular!

Up first, we learn the true meaning of Christmas (and Cincinnati) when we follow a young Drew Barrymore, Keanu Reeves, Jill Schoelen and Googy Gress(?!) into a magical fairytale world filled with teddy bears and cookies where they must battle the evil Richard Mulligan with the help of the sage-like toymaker Pat Morita, in the goofy 1986 made-for-TV movie Babes in Toyland.

Then, we walk the streets of New York City during Christmas with lonely hired killer Frank Bono (Allen Baron, who also wrote and directed the film) in Blast of Silence from 1961. This black & white crime drama is a throw back to the film noir films of the 40's and features a "killer" jazz score.

And finally, we travel to Amsterdam, where, according to legend, every 30 years, when the moon is full on December 5th, the evil Saint Nicholas visits naughty children to reek bloody carnage, in the 2010 Dutch horror flick Sint (AKA Saint) directed by Dick Maas.

All this plus witty banter between friends, soundboard antics, lots of Cincinnati references, Junk (voice)Mails, DVD & Blu-ray releases, Nerd News and so much more!

Also, if you like the show, please take a minute and subscribe and/or comment on us on iTunes, Stitcher, Blubrry or Podfeed.net. We gain giant holes in our stomach from your love and support.
Labels: Allen Baron Babes in Toyland Blast of Silence Christmas Dick Maas Drew Barrymore Googy Gress Jill Schoelen Keanu Reeves Pat Morita Podcast Richard Mulligan Saint Saint Nick Sint