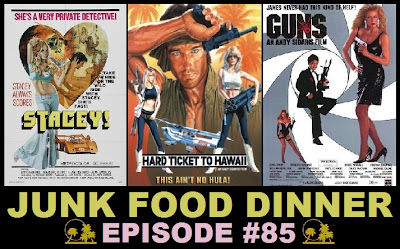 Get ready for girls, guns, bullets and bombs as Junk Food Dinner fills your Thanksgiving with a cornuco 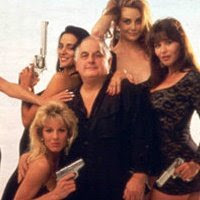 Up first we take a look at Mr. Sidaris' first film, Stacey from 1974. This perplexing piece of early 70's exploitation fare sets the formula for all future Sidaris flicks; tropical settings, gorgeous women kicking ass, plenty of gratuitous nudity, gun battles and explosions. Stunning Playboy Playmate Anne Randall plays the titular Stacey, a private detective hired by the wealthy matriarch of a dysfunctional family to see who is worthy of her fortune.

Next, a little something for everybody; sexy DEA agents, stolen diamonds, cancerous snakes, skateboarding assassins, bazookas and a deadly Frisbee in the Sidaris masterpiece Hard Ticket to Hawaii from 1987. This goofy action flick stars Sidaris-mainstays Donna Speir and Hope Marie Carlton along with soap opera star Ronn Moss and kick boxer Harold Diamond, hot on the trail of a gang of evil crime lords in the Aloha State. Suffice to say, many breasts are bared and many things get blown up.

And finally, Erik Estrada joins the party as a South American gunrunner who hires a couple of bumbling assassins to take out Donna Speir and her sexy friends, only to find out that these ladies aren't going out without a fight in the awesomely titled Guns from 1990. Along with more Sidaris favorites like Roberta Vasquez and Cynthia Brimhall, this movie also features future Machete star Danny Trejo.

All this plus witty banter between friends, listener feedback, Nerd News, DVD & Blu-ray releases, and so much more!


MP3 Direct Download
Got a movie suggestion for the show, want to give your opinion on a movie we talked about or just want to tell us we suck? Drop us a line at JFDPodcast@gmail.com. Or leave us a voicemail: 347-746-JUNK (5865).