JFD194: The Rambler, Plus One, Escape From Tomorrow 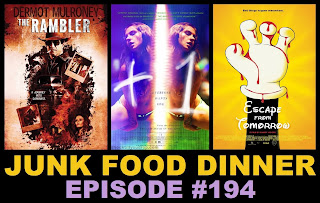 A little known fact about New Year's: even though we're in January, technically 2013 isn't over until JFD194 gets released. So get ready to celebrate, because our 2013 Year in Review special has arrived. In addition to listing our top five favorite (and top one least favorite) movies of the year, we'll review three cult-y flicks from 2013!

The first new release we tackle on the show is The Rambler, a surreal crime/road flick that features a very surprising amount of head trauma for one movie. Dermot Mulroney plays the title character in this "psychotronic horror" film. It prominently features a mad scientist who can record dreams out of people's head and onto VHS, except when it causes their eyeballs to explode.

Next up, something inexplicable is happening at a wild teenage party in 2013's +1 (aka Plus One). Part of a definite wave of low-budget genre-blending movies, +1 has a unique and subtle approach to sci-fi.

Lastly, we head down to Walt Disney World with a family man on the verge of mental collapse in the surreal horror/comedy/weird movie Escape From Tomorrow! Filmed entirely without authorization at DisneyWorld and Disneyland, this movie generated significant attention on the festival circuit for its guerrilla filming techniques. But can the movie live up to the hype?

All this plus witty banter between friends, hobo Owen Wilson, the Sweetest Top 5 Alive, Parker's got a cold, Epcot on your head, VHS dreams and so much more!

Also, if you like the show, please take a minute and subscribe and/or comment on us on iTunes, Stitcher, Blubrry or Podfeed.net. It's a small world after all with your love and support.

Labels: Disney End of the Year Escape From Tomorrow Guerrilla Natasha Lyonne Plus One Podcast road sci-fi Surreal The Rambler