JFD296: City of the Living Dead, From Beyond, The Necronomicon 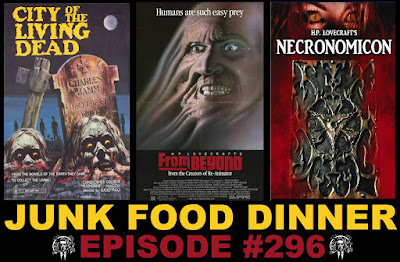 First, a story so Lovecraftian it isn't even based on Lovecraft at all! Lucio Fulci's "City of the Living Dead" (aka "Gates of Hell") from 1980 is a tale of a journalist and a psychic tasked with stopping the gates of hell from opening after a priest commits suicide. It's also the tale of a homeless pedophile. For some reason.

Next, Stuart Gordon adapts a short story for 1985's "From Beyond." The director teams back up with Jeffrey Combs and Barbara Crampton ("Re-Animator") for this tale of scientists who accidentally discover that monsters are all around them constantly.

Finally, Jeffrey Combs returns as Lovecraft himself in the anthology film "Necronomicon" from 1993. Brian Yuzna, Christophe Gans, Shusuke Kaneko each direct a story based on the author's works. The tales include squid monsters, reanimation and demonic space bats.

All this, plus Nerd News, DVDS, Binders full of women, Old Zealand, Tom Cruise Chat, Who's the REAL Freado?, Voicemails, friendly chat, the possibility of a beautiful boob slipping out and so much more.

Donloyd Here
Got a movie suggestion for the show, want to give your opinion on a movie we talked about or just want to tell us we suck? Drop us a line at JFDPodcast@gmail.com. Or leave us a voicemail: 347-746-JUNK (5865).
Also, if you like the show, please take a minute and subscribe and/or comment on us on iTunes, Stitcher, Blubrry or Podfeed.net. Check us out on Facebook and Twitter! We'll wrestle Cthulhu for your love and support.