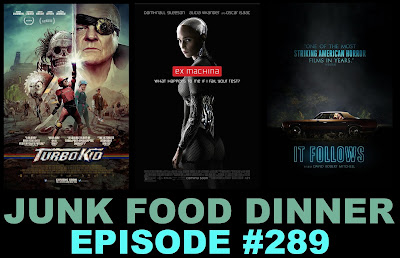 As 2015 comes to a close, we take a look back at three flicks that made an impact on the world of genre filmmaking over the past year.

Up first, a young man is trying to survive the post-apocalyptic wasteland of 1997 but when he teams up with an enthusiastic robot chick he finds himself at odds with an evil overlord (Michael Ironside) and his army of masked marauders in the super-retro, super-violent Turbo Kid.

Next, Alex Garland spins a tale of a young bro-grammer (Domhnall Gleeson), who wins a chance to meet the genius mogul of the world's largest internet search engine (Oscar Isaac) and participate in a series of tests to determine if a newly created robot with artificial intelligence can really feel. But it quickly becomes clear that things aren't exactly what they seem in the sci-fi thriller Ex Machina.

And finally, a teenage girl (Maika Monroe) has sexual encounter with a strange boy who afterwards reveals that she is now cursed with an evil spirit that will follow her to the ends of the Earth until she is killed. The only way to get rid of it is to pass it to someone else via sex. Needless to say, things get sexy and spooky in It Follows from director David Robert Mitchell.

All this plus witty banter between friends, Parker's continued love affair with a Nintendo tape, dream talk, a warning to be humble or else, Nerd News, Redd Foxx praise, legal advice for filmmakers, blu-rays at the nice price, disagreements about robots, songs about herpes, absolute confidentiality, continued lack of police involvement and a whole lot more!

Got a movie suggestion for the show, want to give your opinion on a movie we talked about or just want to tell us we suck? Drop us a line atJFDPodcast@gmail.com. Or leave us a voicemail: 347-746-JUNK (5865).
Also, if you like the show, please take a minute and subscribe and/or comment on us on iTunes, Stitcher, Blubrry or Podfeed.net. Check us out onFacebook and Twitter! We can finally shake this sexual curse with your love and support.