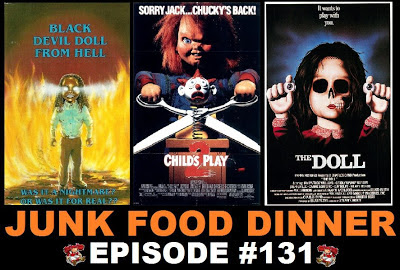 As SHLOCKTOBER 3 builds with terrifying voracity we're only a matter of weeks away from the best holiday. This week, though, we're talking killer dolls and it's quite a lineup.

Up first we have a DEVIL of a time cracking wise about Chester N. Turner's first feature (in a career of two) about a Jesus freak who yearns to freak in a different way. It's 7 minutes of credits, followed by 63 minutes of the steamiest puppet sex this side of Tuesday in 1984's - BLACK DEVIL DOLL FROM HELL!

Next, Chucky's back! Now with more terrifying facial expressions, wittier banter, and hostage negotiations! Andy's there, too but who cares when you have all this amazing, cutting edge animatronic work and iconic voice acting to soak up! CHILD'S PLAY 2 from 1990!

All this plus witty banter between friends, dead eyes and tiny hands, less glitchy Skype noise, soundboard antics, Junk Mail, discussions of where you should and shouldn't put hot meals, DVD & Blu-ray releases, Nerd News and so much more!

Also, if you like the show, please take a minute and subscribe and/or comment on us on iTunes, Stitcher, Blubrry or Podfeed.net. We gain a genuine sense of human emotions from your love and support.