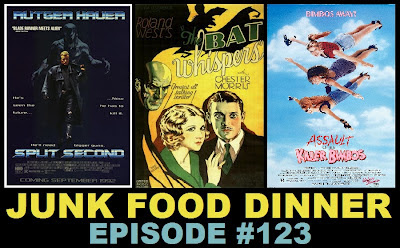 Rats, Bats and Bimbos. Oh my! It's time for another fun-filled episode of everybody's favorite cult movie podcast!

Up first this week, the JFD boys travel to the futuristic world of 2008, where global warming has covered London in a foot of water and hard-nosed cop Rutger Hauer is on the hunt for a supernatural killer that's ripping people's hearts out. Kim Cattrall, Alastair Duncan and Michael J. Pollard round out the cast in the 1992 cyber-punk action flick Split Second directed by Tony Maylam (The Burning).

Next, we take in what is by far the oldest film we've ever reviewed on the show, The Bat Whispers from 1930. In this visually stunning, black & white crime thriller directed by Roland West (Alibi), a mysterious criminal known as The Bat has a mansion full of hammy actors on edge.

And finally, Elizabeth Kaitan and Christina Whitaker play a pair of go-go dancers who are on the run after being framed for murder. Along the way the encounter truck stop waitresses, small town cops and a group of hard-partying surfers in the 1988 comedy Assault of the Killer Bimbos directed by Anita Rosenberg (Modern Girls) and co-written by Ted Nicolaou (Terror Vision).

All this plus witty banter between friends, glitchy Skype noise, soundboard antics, hating on re-makes, Junk Mail, DVD & Blu-ray releases, Nerd News and so much more!

MP3 Direct Download
Got a movie suggestion for the show, want to give your opinion on a movie we talked about or just want to tell us we suck? Drop us a line at JFDPodcast@gmail.com. Or leave us a voicemail: 347-746-JUNK (5865).

Also, if you like the show, please take a minute and subscribe and/or comment on us on iTunes, Stitcher, Blubrry or Podfeed.net. We gain psychic connections with murderous monsters  from your love and support.
Labels: Anita Rosenberg Assault of the Killer Bimbos Christina Whitaker Elizabeth Kaitan Kim Cattrall Podcast Roland West Rutger Hauer Split Second Ted Nicolaou The Bat Whispers Tony Maylam