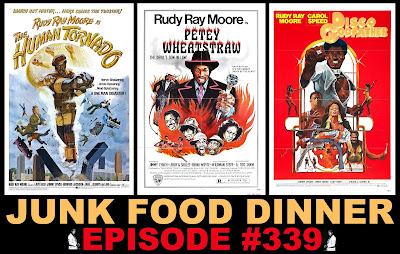 If you're feeling low and ain't got no class, allow this episode to rock your motherfuckin' ass! This week JFD celebrates the badass Rudy Ray Moore! We are joined by Joe from Vinegar Syndrome, who have recently released some lovingly restored blu-rays of the films reviewed tonight.

Up first, Rudy reprises the role that made him famous as Dolemite, in the sequel The Human Tornado from 1976. In this film Dolemite and his friends (including a young Ernie Hudson) find themselves on the run after he is caught in bed with the racist sheriff's wife.

Next, things go to Hell as we tackle Petey Wheatstraw: The Devil's Son in Law from 1977. In this film Rudy plays the titular Petey Wheatstraw, a world famous comedian who knows kung fu. But after he and a bunch of his friends are gunned down at child's funeral, he makes a deal with the devil to make things right and get revenge.

And finally, Rudy curbs the cussing and puts out a PG-rated anti-drug flick called Disco Godfather from 1979. In this one, Rudy plays a disco owner named Tucker whose nephew gets fucked up on PCP. Tucker takes matters into his own hands to take down the creeps selling the dope and messing up his community, all while busting some sweet disco moves.

Got a movie suggestion for the show, want to give your opinion on a movie we talked about or just want to tell us we suck? Drop us a line atJFDPodcast@gmail.com. Or leave us a voicemail: 347-746-JUNK (5865).
Also, if you like the show, please take a minute and subscribe and/or comment on us on iTunes, Stitcher, Blubrry or Podfeed.net. Check us out onFacebook and Twitter! We'll knock out some no-business, rat soup eatin', insecure honky motherfucker with your love and support.