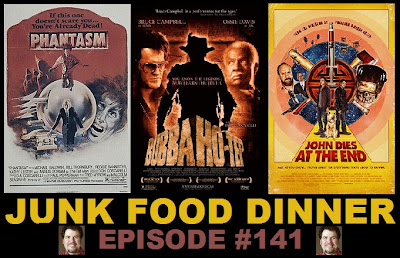 This week, we celebrate Don Coscarelli by gushing about (mostly) three of his flicks.

First, a boy discovers that weird things are afoot when a Tall Man moves into town in Phantasm from 1979. This massively influential indie flick took in big box office receipts during its initial run and has spawned three sequels and a rabid fandom.

Next, two elderly men must protect their hospice from an ancient, soul-sucking mummy in 2002's Bubba Ho-Tep. Starring Bruce Campbell. Oh, and the two men in question may or may not be Elvis and JFK.

Finally, two slacker pals must save the world in the highly anticipated movie based on David Wong's cult book "John Dies at the End." The movie co-stars Clancy Brown and Paul Giamatti.

All this plus witty banter between friends, soundboard antics, lots of Mark's clicky pen, Junk (voice)Mails, DVD & Blu-ray releases, Nerd News and so much more!