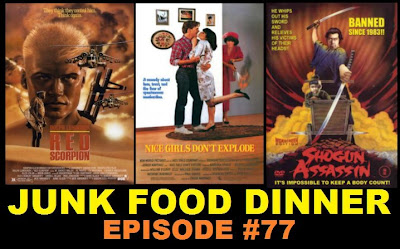 Kevin's gone this week. Can the guys do a show without their fearless leader? Spoiler Alert: The answer is "mostly." Professional podcaster Mike Dikk from Kissing Contest fills in and we talk about three pretty different, mostly interesting movies.

First up, we discuss Dolph Lundgren's 1989 action flick, "Red Scorpion." The movie is directed by JFD-favorite Joseph Zito. Oh, and Parker picked it based on a .gif he saw of a guy blowing up.

Next up is "Nice Girls Don't Explode" from 1987. This fiery tale of unbridled passion and burning will leave you feeling the fuego. Wallace Shawn co-stars in a performance that sets the screen ablaze.

Finally, we discuss a Samurai dad in 1980's "Shogun Assassin." The film was cut together from pieces of two of the "Lone Wolf and Cub" films and was banned in England for a while due to some awesome fighting.

Also, if you like the show, please take a minute and subscribe and/or comment on us on iTunes, Blubrry or Stitcher. We gain precious nutrients from your love and support.
Labels: Dolph Lundgren Joseph Zito Mike Dikk Nice Girls Don't Explode Podcast Red Scorpion Roger Corman Shogun Assassin Wallace Shawn