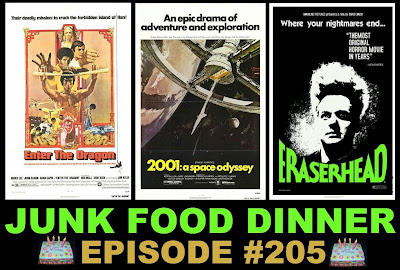 It's our fourth anniversary, Junkies! On this episode, we receive our bachelor's degrees in Cult Cinema. Except Sean. He's still working on his Associate's degree. For this intense occasion, we're joined by JFD OG, Mark Freado! Three JFD hosts is theoretically possible. But four is silly.

We get into the saddest Nerd News we've ever had to deliver concerning the death of Dave "Oderus Urungus" Brockie of GWAR. After that, we forego DVD Chat to do a roundup of each of our Top 5 favorite and least favorite movies we've done on the show in the last year. As for the movie reviews, we summon 3 cult classics.

First, the movie that helped make Bruce Lee a legend: 1973's "Enter the Dragon." Lee plays a martial artist who enters a fighting tournament to win back the honor of his crew. Also in the tournament are John Saxon ("A Nightmare on Elm Street") and Jim "The Dragon" Kelly. The flick is directed by Robert Clouse, of "Gymkata" "fame."

Next, we watch Stanley Kubrik's 1968 classic "2001: A Space Odyssey." Scientists scour the universe trying to solve the mystery of suddenly emerging monoliths. What are the monoliths? Who made them? Why was HAL so angry? And how many heavy doobies does the film require?

Finally, we check out one of the original Midnight Movies: David Lynch's 1977 film debut, "Eraserhead." Experimental, disturbing and absurd: Jack Nance deals with raising a mutant baby and men with weird levers living on other planets.

All this plus witty banter between friends, heavy doobies, the kinds of dudes we have soft spots for, Mark and Parker Freaky Friday-ing, one Nerd News story, Simpsons did it, Nancy's Dad, birthday parties and so much more!

Also, if you like the show, please take a minute and subscribe and/or comment on us on iTunes, Stitcher, Blubrry or Podfeed.net. We'll sternly accost a vending machine for your love and support.