JFD187: Tales From the Quadead Zone, Deadline, In the Mouth of Madness 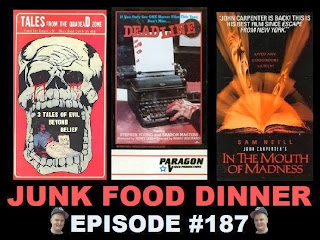 Forget everything you know about Junk Food Dinner's usual movie selection processes! We've upended everything with our brand-new ME-VEMBER Initiative! For the next three weeks, each of your JFD hosts will curate an entire episode as they see fit! This week, get ready for WRITER'S SHOCK! 3 Horror Flicks About Horror Novels! as presented by intrepid Junk Food Rookie Sean Byron!

To celebrate the Massacre Video release of The Complete Works of Chester Turner (Black Devil Doll from Hell and Tales From the Quadead Zone) on DVD and VHS this week, we chat with Louis Justin, owner of Massacre about the films of Chester Turner! Hear the behind the scenes tales of the DVD commentary recording sessions, learn what Chester is up to today, and find out all about devil dolls who are black and from hell. Afterwards, we dive into our review of Tales From the Quadead Zone, Chester's 1987 horror anthology follow-up to Black Devil Doll From Hell about a woman who reads from a spooky book to her ghost kid. Also, hair gets blown around ever so slightly (woooooooosh).

Next, a guy whose name sounds sorta like "Mario Ass Party" directed this surprisingly mean-spirited and gory low-budget Canadian thriller about a horror writer's (no, not Stephen King) descent into madness and poor eyeglass selection, in 1984's Deadline! You've never heard of anyone in this movie, but you'll never forget that goddamned farm goat. Bonus: lots of child murder and sexual violence!

Creepy spoopy touches abound in this later John Carpenter homage to HP Lovecraft, 1994's In the Mouth of Madness starring the underrated Sam Neill! Horror writer Sutter Cane (no, NOT Stephen King!) has disappeared from sight, and his publisher needs to find him, but nobody expects to uncover the mysteries in the small New Hampshire town where he may be hiding. John Glover, David Warner and Charlton Heston appear in minor roles.

All this plus witty banter between friends, spilling wine and mustard, Skype crackles, Ever So Slight Hair Movements, Shirley Jones's mother's porcelain bell, clown zombies, intense method actor goats, and so much more!

Also, if you like the show, please take a minute and subscribe and/or comment on us on iTunes, Stitcher, Blubrry or Podfeed.net. We can create outlandish maps leading to Hobb's End by harnessing the power of your love and support. Don't forget to vote in our JFD Logo Contest! 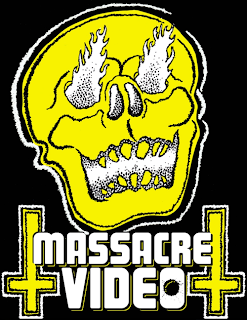