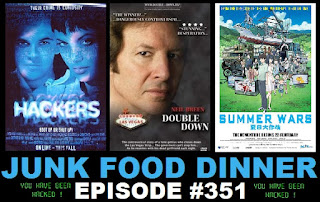 Break out your 28.8 KBPS modem and your brand new laptop with 4 whole MB of RAM  because it's time to hack the planet!

Up first, Jonny Lee Miller (Sherlock) is a young computer delinquent who moves to NYC and falls in with a group of hacker teens including Matthew Lillard, Laurence Mason and Angelina Jolie. When they uncover a criminal plot by an internet security nerd played by Fisher Stevens their freedom is threatened in the ultra-90's cyber classic(?) Hackers.

Next, we delve even further into the world of vanity film maker Neil Breen with 2005's Double Down. In this low-budget action flick Breen plays a renegade hacker and former soldier hired to to take down the Las Vegas Strip for two months using only his 4 laptops and 3 flip phones. Fueled only by his mistrust of the government and cans of tuna, he's a one man hacking machine.

And finally, we journey to a land of animated hackers in 2009's Summer Wars. This stylish anime, directed by Mamoru Hosoda, blends a colorful cyber battle zone with a grounded and touching family story making for a unique experience even for non-otakus.