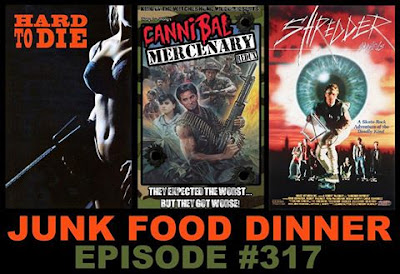 Hey, Junkies! The temperatures keep rising in the JFD studios as we get closer to Ghoul Summer. Or wade through it, as the case may be this week.

First, a group of sexy temp workers set an ancient evil free while burning the midnight oil in Jim Wynorski's "Hard to Die" from 1990. If this movie seems familiar, it's because it's a remake/sequel to "Sorority House Massacre 2" and it's also somehow "Slumber Party Massacre 6."

Next, a group of soldiers in Vietnam fight snakes, get their genitals punished and get peed all over in "Cannibal Mercenary" from 1983.

Finally, a skateboarder travels to Hell in 1990's "Shredder Orpheus" - a movie that combines industrial aesthetics and Greek tragedy.

All this, plus Nerd News, DVDs, the saddest nerd news, basketball shorts, sticking it to the man, Beyond the Gates Chat, has Sean even seen TMNT2?, Zatoichi: The Blind Podsmen, Donald Lloyd, new T-shirts and so much more!