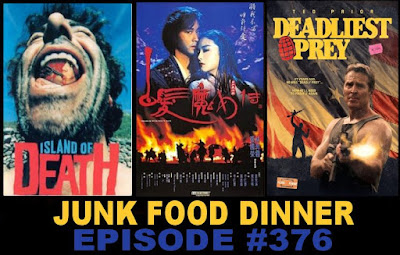 Kevin's out partying in Boston this week, but we have a stacked show nonetheless! We have an interview with the Found Footage Festival dudes and we're joined by Derrick from Astro Radio Z to discuss three wacky films!

First, a couple of tourists get into some ghoulish nonsense while on vacation in Greece in the 1976 video nasty "Island of Death." (It's not an action movie).

Next, Ronny Yu's classic Hong Kong take on Romeo and Juliet set against an old timey Chinese war: "The Bride with White Hair" from 1993.

Finally, David A Prior's sequel to the epic story about hunting humans in the woods for little to no reason: "Deadliest Prey."

All this, plus Bill Zebub chat, Voicemails, incorrect theme songs, no nerd news, no dvds, ghoul summer chat and so much more!