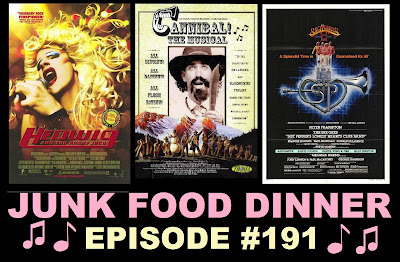 It may be cold outside but all we want to do is SING! On this week's episode we go back to the time honored tradition of cult musicals!

Up first a transexual glam rocker travels from Berlin to Kansas after a botched sex change operation and tours the country in an effort to spread the gospel of love and rock 'n roll, all while exposing her famous ex lover who stole her music in the 2001 rock musical Hedwig and the Angry Inch written, directed and starring John Cameron Mitchell, based off his off-Broadway stage production and featuring music by Stephen Trask.

Then, we get the true story of Alfred Packer, a prospector who was accused of cannibalism in 1873 (with songs!) in Cannibal! The Musical from 1993. This low-budget comedy sing-along was the student film of Trey Parker and Matt Stone before becoming mega stars with South Park and was released by Troma.

Finally, we see what happens when people with more money than sense try to put together a movie based soley on Beatles songs (without any actual Beatles) in 1978's what-we're-they-thinking musical romp Sgt. Pepper's Lonely Hearts Club Band starring The Bee Gees, Peter Frampton, Donald Pleasence and for some reason George Burns.

All this plus witty banter between friends, frost on your lawn, Nerd News, this week's DVD and blu-ray releases, Kyle From Kentucky, Cosby Talk, singing, dancing and so much more!

Also, if you like the show, please take a minute and subscribe and/or comment on us on iTunes, Stitcher, Blubrry or Podfeed.net. We're able to t the high notes with your love and support.