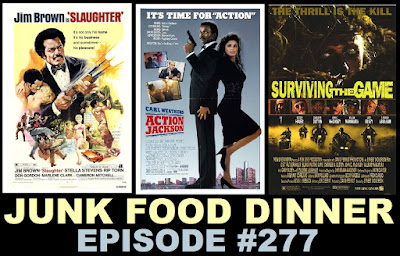 Get ready for bombs, bullets and badasses with our third and final week of Shock & Awe-gust, with Kevin's theme show featuring three exciting "black-tion" flicks.

Up first, Jim Brown is a Vietnam vet/Green Beret, who returns home after his parents are killed in a mob hit. After a botched attempt at revenge, the US Treasury recruits him to travel to "South America" to bust up the mob ring (including Rip Torn and Stella Stevens) and find the ones responsible for his parents' death in Slaughter from 1972.

Next, Carl Weathers is a Detroit cop with a reputation as one mean son of a bitch, in Action Jackson from 1988. When union leaders are being killed off in explosive fashion, Jackson is hot on the trail of Craig T. Nelson who is the president of a large car company. With the help of Sharon Stone and Vanity, Jackson vows to get his man, no matter how much damage he does in the process.

Finally, Ice-T is a homeless man in Seattle who's about ready to end it all when he's offered a job as a "hunting guide' by a group of rich dudes (Charles Dutton, Rutger Hauer, Gary Busey, F. Murray Abraham, etc), he accepts and travels with them into the remote wilderness. But things quickly go bad when Ice-T realizes they won't be hunting animals, they will be hunting him in Surviving the Game from 1994.

Got a movie suggestion for the show, want to give your opinion on a movie we talked about or just want to tell us we suck? Drop us a line atJFDPodcast@gmail.com. Or leave us a voicemail: 347-746-JUNK (5865).Also, if you like the show, please take a minute and subscribe and/or comment on us on iTunes, Stitcher, Blubrry or Podfeed.net. Check us out onFacebook and Twitter! We can overthrow the white man with your love and support.