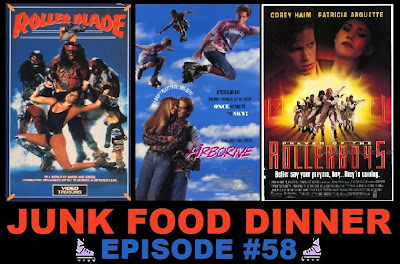 Then, a generic young pretty boy from California is forced to move in with his relatives in Cincinnati and prove himself to the locals by taking part in an epic downhill inline skate race in the 1993 teen comedy Airborne, featuring Seth Green and Jack Black.

And finally, Corey Haim and Patricia Arquette team up to take down a gang of rollerblading, drug dealing, white supremacists in the distopian cyber-punk action-drama Prayer of the Rollerboys from 1990.

Also, we have Nerds News, this week's DVD and Blu-Ray releases and much more!

Also, if you like the show, (and why wouldn't you if you've come this far) please take a minute and subscribe and/or comment on us on iTunes, Blubrry or Podfeed.net. We gain precious nutrients from your love and support.
Labels: Airborne Cincinnati Corey Haim Donald G. Jackson inline skating Jack Black Patricia Arquette Podcast Prayer of the Rollerboys Roller Blade rollerblades Seth Green