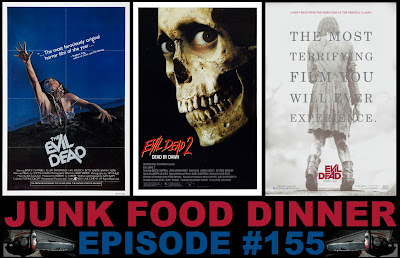 Grab your shotgun and your chainsaw and take a trip with JFD into a secluded cabin in the woods! With the release of the remake of one of the most beloved cult horror films of all time, we decided to take an in-depth look at the infamous Evil Dead series of films.

Up first, we dig into the movie that started it all. You know the plot; five friends travel to a small cabin in the forest, looking for a good time, but when they find a tape recorder and mysterious book in cellar, all hell breaks lose as the young people begin to turn into evil demons and it's up to Bruce Campbell to try and stop it in the 1981 directorial debut of Sam Raimi, The Evil Dead.

Next, we head back to the cabin for even more demonic hi-jinx. Bruce Campbell returns as Ash in this sequel/remake, that finds him again at a secluded cabin with his girlfriend. Once again a mysterious book and tape recorder unleash demons from another world that cause a variety of gory and zany things to happen to anyone that happens to stop by, in the horror-comedy classic Evil Dead 2: Dead By Dawn from 1987.

And finally, we head out to the theater to catch the brand new entry under the Evil Dead imprint, the Fede Alvarez directed remake/reboot Evil Dead from 2013. This new version gained a lot of buzz before its release for promising to remain true to the spirit of the original and deliver an onslaught of practical gore effects. Does it live up to the hype? You'll have to tune in to find out.

All this plus witty banter between friends, Nerd News, this week's DVD & blu-ray releases, complete confidentiality, no police involvement, songs about trees, stories about Mary Woronov, Donald Lloyd of the Junk Food Dinner Warehouse, Junk (voice)Mails, and so much more!