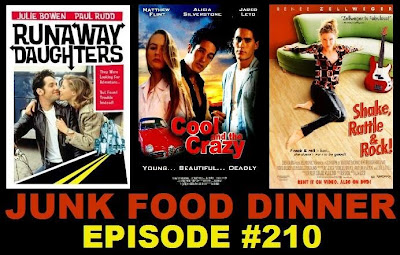 We've turned April into AIPril (did you see what we did there?) by paying tribute to American International Pictures once again with our Rebel Highway Theme Show! For those not in the know (which included us until recently), Rebel Highway was a 1994 series of 10 TV movie homages to AIP produced for Showtime by Debra Hill and the son of Samuel Z. Arkoff and directed by ten different genre directors.

First up, we hit the road with Jenny Lewis, Holly Fields, Julie Bowen, and a very young Paul Rudd in Joe Dante's contribution to the series, Runaway Daughters! An amazingly solid roster of character actors bolster this tribute to the 1956 original, and Roger Corman puts in one of his more memorable on-screen appearances.

Next up, Ralph Bakshi takes a rare break from animation to direct the fully live-action Cool and the Crazy starring a young Alicia Silverstone and Jared Leto, also from 1994. It also has a Blues Traveler song over the closing credits, so if you're a Blues Traveler completist you might really be into this.

Finally, 1994's Shake, Rattle and Rock! rounds out the show! Allan Arkush directs this tribute to youthful rebellion and rock music. Some consider this to be the unofficial second sequel to Rock 'n' Roll High School, but everyone agrees that we reviewed it on the show this week.

All this plus witty banter between friends, JFD’s Snacks Chat, Parent’s Actors, Sweet(man) Dreams, Wolf Police, Voicemail’s aplenty, Weird-ass Hypotheticals, the return of Walter Paisley and so much more!

Also, if you like the show, please take a minute and subscribe and/or comment on us on iTunes, Stitcher, Blubrry or Podfeed.net. Without your love and support, we'll be a loner, Dottie - a rebel.