JFD151: Video Diary of a Lost Girl, A Million in the Morning, Operation Pink Squad 2 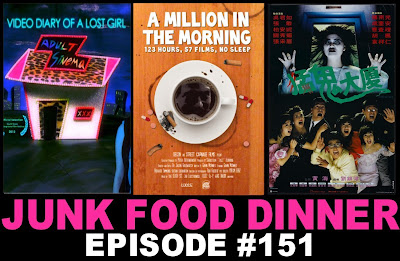 Kevin's off this week to hang out at some SXSW thing in Boston, but Mark and Parker hold things down here with the help of friend of the show, Sean Byron and the JFD Grampa.

First, a girl's supernatural origins cause death for anyone she sleeps with in 2012's "Video Diary of a Lost Girl." We're joined by the director and writers Lindsay Denniberg and Chris Shields to talk about the film, influences, surrealism, Peter North, the benefits of friends in bands and lots more.

Next, a documentary about marathon movie-watching gets derailed by an exhausted, drunken Gavin McInnes in 2010's "A Million in the Morning." Originally meant to be a straight documentary about a Netflix contest to crown a new world record for most movies watched with no sleep, host Gavin McInnes (VICE, Street Carnage) takes the production dangerously off the rails.

You'll get all this, Nerd News, DVDs, good times with good dudes and happiness!

Got a movie suggestion for the show, want to give your opinion on a movie we talked about or just want to tell us we suck? Drop us a line at JFDPodcast@gmail.com. Or leave us a voicemail: 347-746-JUNK (5865). Also, if you like the show, please take a minute and subscribe and/or comment on us on iTunes. Our birthday is coming up and we'd love to get some reviews and ratings as presents!