JFD176 - For Y'ur Height Only, Kung Fu Hustle, Rumble in the Bronx! 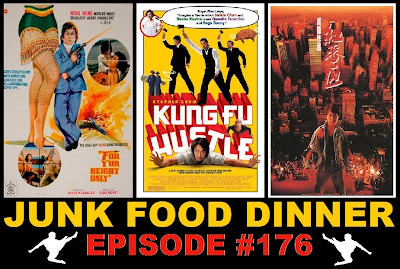 The bad news is; Shock & Awe-gust is almost over. The good news; we're going out with a bang... er, a punch with our Kung Fu Comedy (KFC) theme show!

Up first, we see international superstar/Filipino dwarf Weng Weng do his best James Bond impression all while dealing kung fu blows to an evil crime syndicate in 1981's For Y'ur Height Only. Bad dubbing, wacky gadgets and awkward love scenes abound in this certified cult classic.

Then, Hong Kong film veteran Stephen Chow writes, directs, produces and stars in one of the most stylish, funniest and prettiest kung fu movies ever made, 2004's Kung Fu Hustle. When The Axe Gang terrorizes the residents of a poor neighborhood Pig Sty Alley, they soon learn that they fucked with the wrong 'hood as several of the residents also happen to be kung fu masters.

Finally, actor, stuntman and all around badass Jackie Chan punches his way into America's heart, after being an international star for years, in the 1995 kung fu action flick Rumble in the Bronx.Chan comes to America and gets harassed by a gang of street thugs for his troubles. But needless to say, Jackie returns the favor with some expert kung fu and stunt work in this nostalgic favorite.

All this plus witty banter between friends, Nerd News, this week's DVD & blu-ray releases, Junk Mail, complete confidentiality, no police involvement, a chance to win a Parker doll, feelin' old and much more.

Also, if you like the show, please take a minute and subscribe and/or comment on us on iTunes, Stitcher, Blubrry or Podfeed.net. We gain tons of new fighting techniques from your love and support.