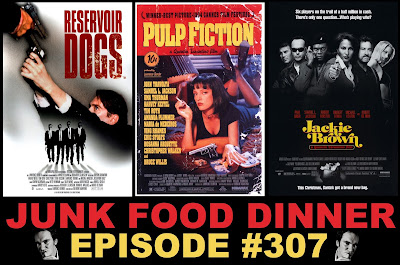 It's our third and final Director's Week of March as we talk about the ultra violent and ultra stylized first three films of Quentin Tarantino.

Up first, six blue-collar criminals plan and execute a jewel heist but when things go wrong, they quickly realize one of them is a cop in Reservoir Dogs from 1992. Tarantino directs a stellar cast including Harvey Keitel, Tim Roth, Steve Buscemi, Michael Madsen and Chris Penn.

Next, the film you couldn't escape in the mid-90's, Pulp Fiction. Tarantino's iconic character study of the lives of criminals and low-lifes inspired a whole generation of filmmakers and film watchers. Another incredible cast including John Travolta, Samuel L. Jackson, Bruce Willis, Uma Thurman and Ving Rhames.

All this plus witty banter between friends, the wacky world of seeing Crispin Glover live, horror convention chat, should kids be allowed in R-rated movies?, the death of Dr. Giggles, brain chat, Nerd News and Blu-Ray Picks, continued lack of police involvement (unless we're slicing off their ears) and a whole lot more!

Got a movie suggestion for the show, want to give your opinion on a movie we talked about or just want to tell us we suck? Drop us a line atJFDPodcast@gmail.com. Or leave us a voicemail: 347-746-JUNK (5865).Also, if you like the show, please take a minute and subscribe and/or comment on us on iTunes, Stitcher, Blubrry or Podfeed.net. Check us out onFacebook and Twitter! We'll develope a foot fetish for your love and support.