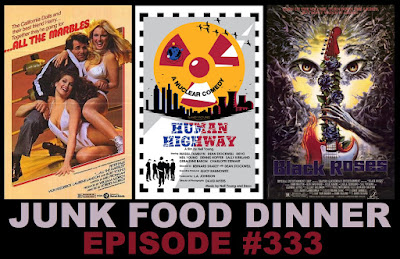 This episode is more or less a spiritual sequel to #JFDecades: The 80's only this time we are joined by none other than Derrick from Astro Radio Z to discuss wrestler babes, radioactive Devo and heavy metal monsters.

Up first, Peter Falk plays a lovable scumbag who manages a female wrestling tag team (Vicki Frederick and Laurene Landon) who travel across the Rust Belt trying to score fame and the chance at the championship in Reno in ...All the Marbles from 1981.

Next, Neil Young finances, writes, directs and stars in Human Highway from 1982. This whacked out vanity project finds Young teaming up with Devo to make a post-modern, surreal music video set at a rinky gas station/auto repair/diner in a radioactive desert.

And finally, a heavy metal band called Black Roses picks a small town as the first stop on its world tour, much to the disapproval of the elders, but the old fogies turn out to be right because the Roses are actually Satanic monsters that are only there to corrupt the youth into mischief and murder in 1988's Black Roses.

All this plus witty banter between friends, love of Northern accents, the return of Kyle from Kentucky, flies in beverages, sad Nerd News & Blu-ray Picks, rock 'n roll music, continued lack of overt police involvement, and a whole lot more!

Got a movie suggestion for the show, want to give your opinion on a movie we talked about or just want to tell us we suck? Drop us a line atJFDPodcast@gmail.com. Or leave us a voicemail: 347-746-JUNK (5865).Also, if you like the show, please take a minute and subscribe and/or comment on us on iTunes, Stitcher, Blubrry or Podfeed.net. Check us out onFacebook and Twitter! We'll wrestle a Canadian Satanic nuclear monster for your love and support.
Labels: ...All the Marbles Astro Radio Z Black Roses Derrick Devo Human Highway Laurene Landon Neil Young Peter Falk Podcast Vicki Frederick