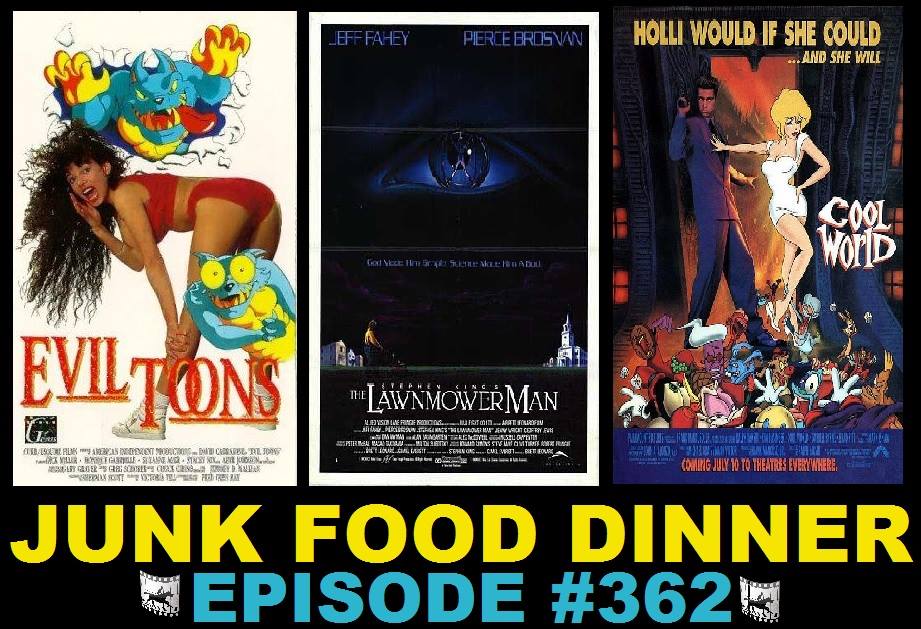 We're kicking off a new (annual?) tradition at Junk Food Dinner - Ani-May, our month-long tribute to animation in cult films! But we're easing into it first with a "Live Action / Animation" theme show - three flicks that blur the lines between the two mediums!

First up! Fred Olen Ray's poster/cover art for Evil Toons (from 1992) promises a whole lot of spooky/sexy cartoon action. But can it deliver, or will the budget be too impossibly low to accomodate any actual animation? And will we still be charmed by it?

Next! In what some are calling a potential "Freado Pick", we discuss the world's only Officially Desiginated non-adaptation of a Stephen King novel: The Lawnmower Man! "Groundbreaking" CGI animation sequences are used in the movie's many Virtual Reality sequences, where an "intellectually disabled" man learns latin and telekensis through the power of drugs. Starring the pilot from Lost! Also from 1992!

Finally, a film that Paramount studios clearly had no idea what to do with, and maybe we don't either. Cool World finds Ralph Bakshi near the end of his career, and Brad Pitt at the start of his. It finds a home for cartoon characters and flesh and blood alike. But does it find out a way to balance cartoonish piano-dropping gags with dark, sexual satire? Only JFD can find out. This one's ALSO from 1992?!

Also, if you like the show, please take a minute and subscribe and/or comment on us on iTunes, Stitcher, Blubrry or Podfeed.net. Check us out on Facebook and Twitter! We'll defragment giant digital heads in the sky for your love and support.
Labels: ani-may animated animation Anime Brad Pitt Cool World David Carradine Evil Toons Fred Olen Ray Junk Food Dinner madison Podcast Ralph Bakshi Stephen King The Lawnmower Man