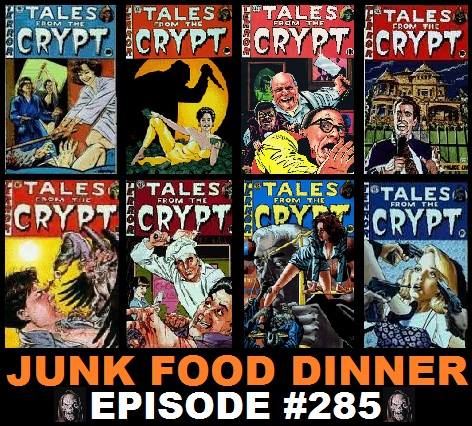 What madness is this? No movies on Junk Food Dinner this week? Schlocktober's getting real wild as we cover not one, not two, but eight episodes of HBO's Tales from the Crypt! And it's even wilder that we're joined by published author Nathan Tolle (Pumpkin Cinema: The Best Movies for Halloween)! This week's roster of cryptic tales includes (and is limited to):

S01E05 "Lover Come Hack to Me" // Tom Holland // June 21, 1989
A newlywed couple (Amanda Plummer and Stephen Shellen) retreat to the wife's aunt's mansion where the husband plans to kill her for her inheritance but soon learns that his wife's family has a dark past and is not what she seems herself.

S02E01 "Dead Right" // Howard Deutch // April 21, 1990
A gold-digging secretary (Demi Moore) follows the advice of a fortune teller (Natalia Nogulich) and marries a man (Jeffrey Tambor) after being told that he will die shortly after inheriting a large sum of money. Also stars Kate Hodge and Linda Cohn.

S02E16 "Television Terror" // Charlie Picerni // July 17, 1990
A tabloid news show host (Morton Downey, Jr.) and his camera crew investigate a house haunted by the ghost of a woman who killed seven men. The host and the crew get more than they bargained for when a chain of supernatural happenings indeed begin taunting them.

S03E02 "Carrion Death" // Steven E. de Souza // June 15, 1991
An escaped con (Kyle MacLachlan) running for the Mexican border ends up killing a state trooper (George Del Hoyo), but in the process is cuffed to him and has to drag the heavy corpse across the desert to freedom.

S06E06 "The Assassin" // Martin von Haselberg // December 7, 1994
A group of operatives invade the home of a housewife (Shelley Hack) in search of her husband whom they believe is an AWOL CIA assassin. Also stars Corey Feldman Jonathan Banks and Chelsea Field.

Also, if you like the show, please take a minute and subscribe and/or comment on us on iTunes, Stitcher, Blubrry or Podfeed.net. Check us out on Facebook and Twitter! We'd wear just about any of the Cryptkeeper's cool costumes for your love and support.