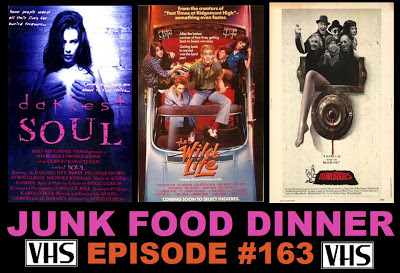 This week, we celebrate the VHS format with guest Dan Kinem, co-director of "Adjust Your Tracking: The Untold Story of the VHS Collector." We talk to Dan about VHS collecting, the documentary, his recent treasure hunts and tons more. Then we review three movies that have never made it to DVD.

Then, two losers resort to grave robbing, which sends them on a downward spiral of immorality in the Shot-On-Video flick, "Darkest Soul." Writer/Director Doug Ulrich blends genres in this 1996 Baltimore movie.

Next, a group of kids make the transition into adulthood in 1984's "The Wild Life," written by Cameron Crowe. The flick features a cast that would grow up to be stars including Chris Penn, Eric Stolz, Lea Thompson and Rick Moranis. The movie harkens back to "Fast Times" but with more of a sex-comedy feel.

Got a movie suggestion for the show, want to give your opinion on a movie we talked about or just want to tell us we suck? Drop us a line at JFDPodcast@gmail.com. Or leave us a voicemail: 347-746-JUNK (5865). And, please, take a moment to like us on Facebook or leave a review/rating on iTunes!!