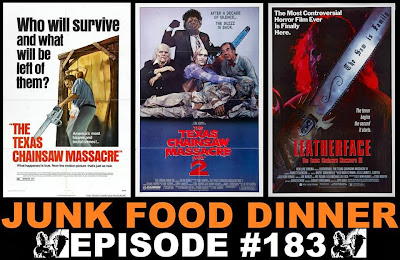 Shlocktober continues this week and we have three movies that lead to one of the most bizarre podcasts in the annals of American history. It's our Texas Chainsaw Massacre theme show.

First, a group of kids stumble on a farmhouse full of cannibal rednecks in Tobe Hooper's 1974 ground-breaking "The Texas Chainsaw Massacre." We're introduced to the iconic Leatherface and the rest of the crazed clan in this gruesome satirical horror flick.

Next, the crazed meat-eating family returns in 1986's "Texas Chainsaw Massacre 2." Made 12 years after the original, Cannon convinced Hooper to return to the franchise with this absurd black comedy featuring Dennis Hopper and Bill Mosely.

Finally, Viggo Mortensen and Ken Foree star in a new age of sadistic cannablism in "Leatherface: Texas Chainsaw Massacre 3" from 1990. Without Tobe Hooper involved, New Line gobbled up the franchise for this sequel... uh, reboot.... or something.

All this plus witty banter between friends, extremely clean Skype qualities, Machete Bombs, this week's DVD + blu-ray releases, complete confidentiality, no police involvement, the musings of a Sweet Man, a saw introduced in the first act not used in the third, bones, and so much more!

Also, if you like the show, please take a minute and subscribe and/or comment on us on iTunes, Stitcher, Blubrry or Podfeed.net. We distill the active ingredient in Hypnocil from your love and support.