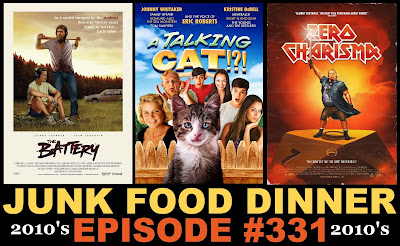 All good things must come to an end and this week we close out out JFDecades series with our current decade, the oh so modern 2010's. And to help us join in the contemporary fun, we are joined by comedian Josh O'neil.

Then, David DeCoteau (Dr. Alien, Creepazoids) brings us this perplexing straight-to-video childrens(?) film about a cat (voiced by a lethargic Eric Roberts) who can use his magic powers to speak to super uninteresting people, including Johnny Whitaker (The kids from Sigmund and the Sea Monsters) and Kristine DeBell (from Alice in Wonderland: An X-Rated Musical Fantasy) in A Talking Cat!?! from 2013.

And finally, we take a look at Zero Charisma, also from 2013, which explores the sad yet amusing life of an over zealous nerd whose only pleasure in life comes from bossing around other dorks while playing role playing games, until a cooler nerd steps in and threatens to disrupt the balance of power.

Got a movie suggestion for the show, want to give your opinion on a movie we talked about or just want to tell us we suck? Drop us a line atJFDPodcast@gmail.com. Or leave us a voicemail: 347-746-JUNK (5865).
Also, if you like the show, please take a minute and subscribe and/or comment on us on iTunes, Stitcher, Blubrry or Podfeed.net. Check us out onFacebook and Twitter! We won't have to jerk off to zombie tits with your love and support.
Labels: A Talking Cat!?! David DeCoteau Dungeons & Dragons Eric Roberts Jeremy Gardner JFDecades Johnny Whitaker Kristine DeBell the battery Zero Charisma