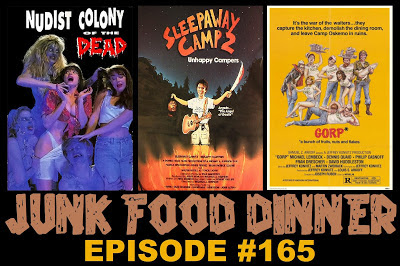 Break out the marshmallows, take off your tube top, and get ready to scream your way through Junk Food Dinner's second annual Summer Camp Theme Show! This week, we explore three very different summer camp experiences that leave us mosquito-bitten, poison-ivied, sun-burned, and tank-trampled.

Next, we travel to Camp Rolling Hills, just 60 miles shy of the infamous Camp Arawak, where Angela killed so many campers not long ago. She returns to kill the naughty campers in 1988's Sleepaway Camp II: Unhappy Campers, but this time the horror elements have been replaced with comedic satire. Will any of the campers escape the righteously evil Angela? We'll spoil it for you!

Finally, we head down to Camp Oskemo, a Jewish summer camp in the Catskills region, where shouting very loud is a popular pastime. There are barnyard animals, silly faces, the world's weirdest kid, and tanks crashing through walls. It's chaotic and crazy and Mr. Sumatra from Shrunken Heads is in it. This is the wacky world of Gorp.

Got a movie suggestion for the show, want to give your opinion on a movie we talked about or just want to tell us we suck? Drop us a line at JFDPodcast@gmail.com. Or leave us a voicemail: 347-746-JUNK (5865).
And, please, take a moment to like us on Facebook or leave a review/rating on iTunes!!