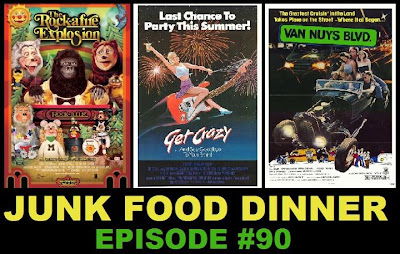 We're kicking off 2012 with playful secrets and varying audio quality!

We're foregoing the Nerd News and DVDs this week to run down our top 5 films of 2011. We also talk about our most hated 2011 films. Then it's on to the old fashioned movie reviews you're used to.

First up is the 2008 documentary "Rock-afire Explosion," about the mechanical animals from Showbiz Pizza and the adults who love them. Much like the subjects of this film, we relish in nostalgia concerning our favorite pizza-selling Southern robotic band from the '80s.

Finally, we immerse ourselves in '70s van culture as we take a trip to "Van Nuys Blvd." (1979). The film follows a bunch of SoCal kids as they cruise the boulevard, sunbathe at the beach, hit Magic Mountain, disco dance, get laid and be real cool. The film stars The Chooch.

Got a movie suggestion for the show, want to give your opinion on a movie we talked about or just want to tell us we suck? Drop us a line at JFDPodcast@gmail.com. Or leave us a voicemail: 347-746-JUNK (5865).
Labels: Allan Arkush Brett Whitcomb Daniel Stern Get Crazy Mary Woronov Podcast Rock afire Explosion The Chooch Van Nuys Blvd William Sachs