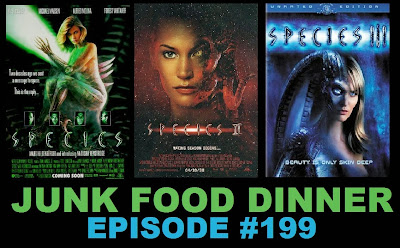 Sci-Fi-ebruary keeps chuggin' along as we explore the universe of sexy aliens and take a look at the iconic Species franchise of films.

Up first, it's the original Species from 1995, the surprise hit that single-handily brought sex back to sci-fi and made a star out of the lovely Canadian actress Natasha Henstridge, who plays Sil, an alien/human hyrid made in a lab and on the loose and looking to mate. Hot on her trail is a team of government agents, made up of some surprisingly A-list actors including Ben Kingsley, Alfred Molina, Forest Whitaker, Marg Helgenberger and Michael Madsen.

Then, we delve into Species II from 1998. In the inevitable sequel, Natasha Henstridge returns as Eve, another alien/human hybrid made by the US Government (will they ever learn?), however, this time a group of astronauts return to Earth after a mission to Mars and bring back an alien predator living inside one of the astronauts. Of course, this leads to the infected cosmonaut to go on a violent sex binge, screwing everything in sight. But when Eve starts having telepathic connections with the alien rapist, it's up to Michael Madsen and Marg Helgenberge, once again, to cock block this alien orgy.

Finally, the franchise moves to straight-to-video town with its third entry Species III from 2004. While Natasha Henstridge does return for a brief cameo at the beginning, she is, in essence, replaced by newcomer Sunny Mabrey as Sara, the human/alien daughter of Eve who is being raised by some goofy college biology professor. But of course, she grows up and is soon infiltrating the college campus looking for potential mates and causing mayhem.

All this plus witty banter between friends, Olympics chat, Nerd News, this week's DVD and blu-ray releases, JFD callers having our backs, Matthew Sweetman talking about Lou Reed and so much more!

Also, if you like the show, please take a minute and subscribe and/or comment on us on iTunes, Stitcher, Blubrry or Podfeed.net. We're able to populate the species with your love and support.