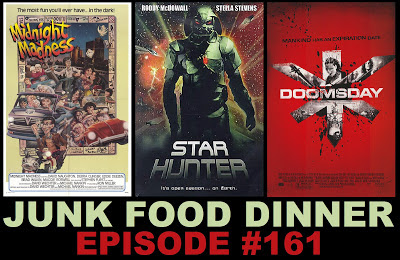 Grab a couple buddies, get in your souped-up van and watch out for aliens and apocalyptic punks because a new episode of JFD is here! And even better, this week we're joined by professional podcaster Mike Dikk from Kissing Contest.

Up first, five teams of college students are summoned by Leon: The Game Master, to participate in "The Great Allnighter", a complex scavenger hunt that takes the teens all over L.A. looking for clues and causing wacky hi-jinx along the way in 1980's Midnight Madness. This unlikely Disney movie stars a lot of recognizable young faces, such as David Naughton (American Werewolf in London), Stephen Furst (Animal House), Eddie Deezen (Surf II) and the film debut of Michael J. Fox.

Next, a group of second-string football players (including Zack Ward [A Christmas Story] who can't stop smoking pot), "ugly" cheerleaders and their inept principal (Stella Stevens) has their bus mysteriously break down in "the hood" on the way back from a game. But when they ask for help from Roddy McDowall, a visiting alien in disguise, they become pawns in his deadly game of Predator (rip-off) and prey in the 1996 straight-to-video sci-fi thriller Star Hunter, co-directed by Fred Olen Ray.

And finally, in the not-too-distant future a deadly virus has broken out across the British isles, leading to the complete quarantine of Scotland and turning it into a post-apocalyptic wasteland. But when a potential cure is suspected to exist inside the island, the British government (including Bob Hoskins) sends an elite special agent (Rhona Mitra) on a special mission inside the island to retrieve the cure from Malcolm McDowell. However, it won't be easy as along the way she must battle an army of post-apocalyptic punks,  medieval thugs and even those she thought she could trust in the over-the-top action hybrid Doomsday from 2008, directed by Neil Marshall.

All this plus witty banter between friends, Nerd News, this week's DVD & blu-ray releases, complete confidentiality, no police involvement, insane revelations by Parker, cannibalism, Donald Lloyd of the Junk Food Dinner Warehouse, Junk (voice)Mails, and so much more!

Also, if you like the show, please take a minute and subscribe and/or comment on us on iTunes, Stitcher, Blubrry or Podfeed.net. We gain clues to the next challenge from your love and support.