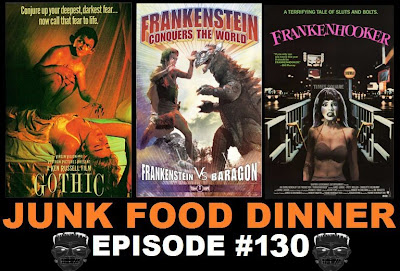 Schlocktober continues with a trio of films about a kind of monster that can only be described as "so sick."

First, director Ken Russell tells the story of the horrors that lead Mary Shelley to write the original "Frankenstein" book in "Gothic" from 1986. This crazy hallucinogen of a film features an all-star cast (featuring Julian Sands!) living out their nightmares at a party in a secluded mansion.

Next,atomic radiation causes the creature to grow to epic sizes in 1965's Kaiju flick "Frankenstein Conquers the World." Frankenstein's monster is being studies by Japanese scientists and breaks free to combat other huge monsters that may or may have back-stories of their own.