JFD348: Hammer, Every Which Way But Loose, Matilda 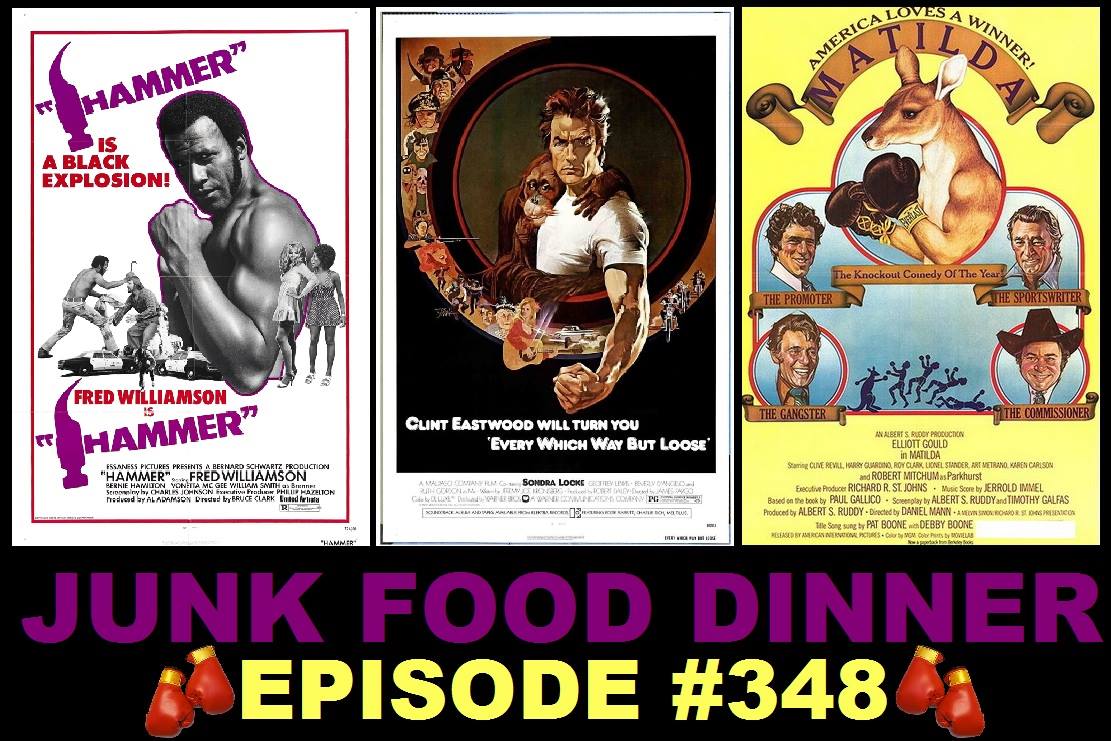 Well, tap your nose and call me Mills Lane, because it's Boxing Week here at JFD headquarters. It's a pugilist picture party here as we study the sweet science. Lace up those gloves, strap on those boots, and get in the ring with your Junk Food Dinner pals this week as we check out three punch-related picks. Let's get it on!

First up! We take a look at the movie that gave Fred “The Hammer” Williamson his nickname, an early blaxploitation classic that follows the rise of a mafia-backed dock-worker turned boxer in a seedy 1972 Los Angeles. It’s Hammer!

The San Fernando Valley was different in 1978. People drove 1940’s pick-up trucks, tended to livestock, and participated in line-dancing. All this while escaping biker gangs on the run with an orangutan. At least, that’s the story told by Clint Eastwood’s Every Which Way But Loose!

For reasons that are unclear, our final selection is part Kangaroo Boxing sports drama, part mafia picture, and part McDonald’s commercial. When a mysterious Irishman arrives in 1978 New York City with his rabbit-punching marsupial, Eliot Gould sees dollar signs in the knockouts and books a series of matches, leading to a thrillingly long-winded final match! It’s Matilda!

All this plus witty banter between friends, speaking of ghost circuses, them news and Blu-ray Picks, continued lack of overt police involvement, sneezes, belches, decrepit erections, gleeks and a whole lot more!

Also, if you like the show, please take a minute and subscribe and/or comment on us on iTunes, Stitcher, Blubrry or Podfeed.net. Check us out on Facebook and Twitter! We'll parachute into a Holyfield match for your love and support.
Buy on Amazon and Watch Along:
Gums *** Nightdreams (search eBay) *** Night Of The Living Babes
Dead Ringers *** Mirror Images *** Twin Sitters
Hammer *** Every Which Way But Loose *** Matilda
Trancers II *** We Are Still Here *** Robot Wars