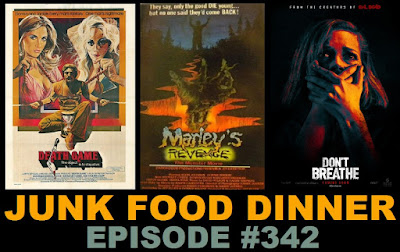 Up first, a well-to-do middle-aged man (Seymour Cassel) is home alone when his wife and kids go out of town, but his solo weekend is interrupted when two young girls (Sondra Locke and Colleen Camp) knock on his door looking for a place to get out of the rain. But after the two seduce him, things quickly turn ugly as the girls begin to threaten and terrorize him throughout his home in Death Game from 1977.

Then, we resurrect a super obscure, low-budget regional horror film from North Carolina, Marley's Revenge: The Monster Movie from 1989. In this flick, two goofy pals are trying to do... something with some refugees when they are preyed upon by rednecks vigilantes who think they're smuggling drugs. But shit really hits the fan when the zombies and alligator monster show up.

And finally, we continue to delve into some more of the cinematic interests of 2016 with Don't Breathe. In this tense crime thriller/horror flick, directed by Fede Alvarez (director the Evil Dead re-make), three Detroit youths break into the house of a blind, old veteran hoping to score some cash, but end up getting more than they bargained for.


Got a movie suggestion for the show, want to give your opinion on a movie we talked about or just want to tell us we suck? Drop us a line atJFDPodcast@gmail.com. Or leave us a voicemail: 347-746-JUNK (5865).
Also, if you like the show, please take a minute and subscribe and/or comment on us on iTunes, Stitcher, Blubrry or Podfeed.net. Check us out onFacebook and Twitter! We'll get through this cold winter with your love and support.
Labels: Colleen Camp Death Game Don't Breathe Fede Alvarez Marley's Revenge: The Monster Movie Podcast Seymour Cassel Sondra Locke